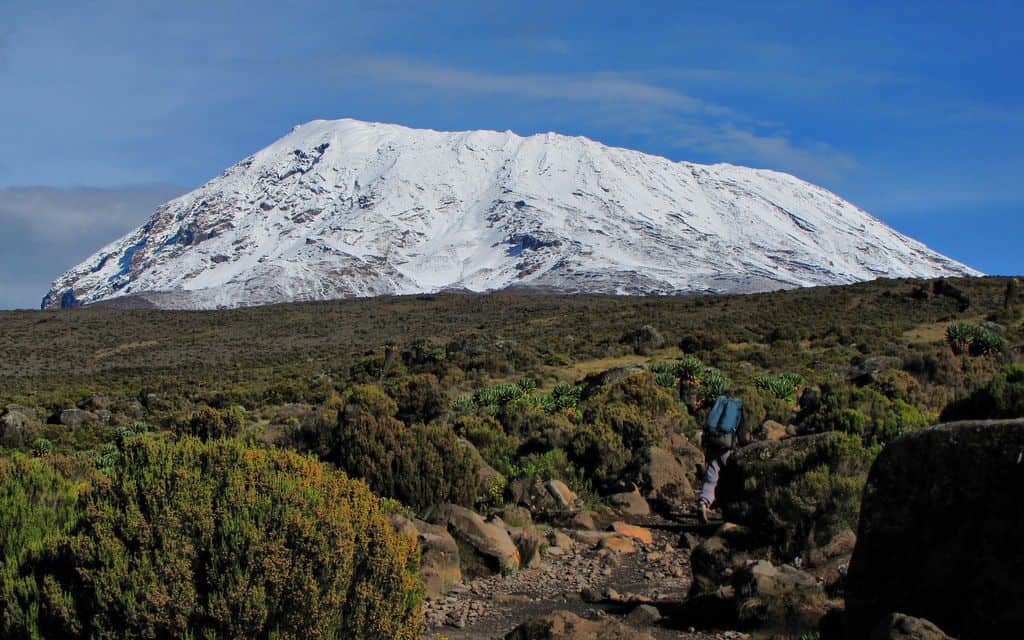 Mount Kilimanjaro is the highest free-standing mountain in the world and second tallest mountain in the world found in Africa continent. Kilimanjaro is formed of 3 volcanoes, Shira within the west (4,269 m) about 14005.91 feets Mawenzi within the east (5,280 m) 17322.83 feet and also the youngest volcano Kibo (5,895m) 19340.551 feet. Mawenzi and Shira area unit extinct and the last major eruption of Kibo was between 150,000 and 200,000 years a go. These days Kibo is dormant however may awaken any time.

The vegetation on the mountain is additionally terribly varied and a few 2,500 species of plants are found here including the endemic and beautiful red and yellow impatiens Kilimanjaro also because of the colorful violet viola. The lower regions of the park are dominated by lush green montane forests with nearly 140 species of trees. a small amount above, distinctive big lobelias grace the moorland zone.

Above 4,000m 13123.36 feet one finds the moon-like desert, where not a lot of grows and the land is filled with rocks and dust. nearer to the summit, hikers are going to be rewarded with stunning sights of glaciers and a deep crater. Approximately 140 mammal species that live in the national park, 87 of them are forest species.

Animals that roll here include elephants, leopards, buffaloes, varies antelopes as well as the rare and vulnerable superior duiker also as primates such as the Black-and-white colobuses monkey and Blue Monkey. additionally, thereto, 24 species of bats and 179 highland bird species have also been noticed within the Mount Kilimanjaro national park. The majority of tourists to the park are hikers. As is to be expected, all have a similar goal in mind – to create it to Africa’s highest peak. 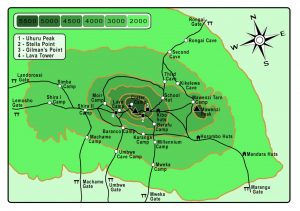 There are seven official routes to settle on from with Marangu being one in every of the simplest routes for inexperienced hikers and those in look for a small amount additional comfort (overnights take place in huts). The Rongai route is that the quietest route and also the most suitable option if you climb within the rainy season as this a part of the mountain, gets the least precipitation.

Camping routes like Machame, Lemosho, and Shira all are a bit more difficult however additionally way more scenic. The most demanding however also the least used route is Umbwe, except for Rongai and Marangu, all different routes descend on the Mweka route. Below is guide chart show best routes  to pick for your Kilimanjaro climb. 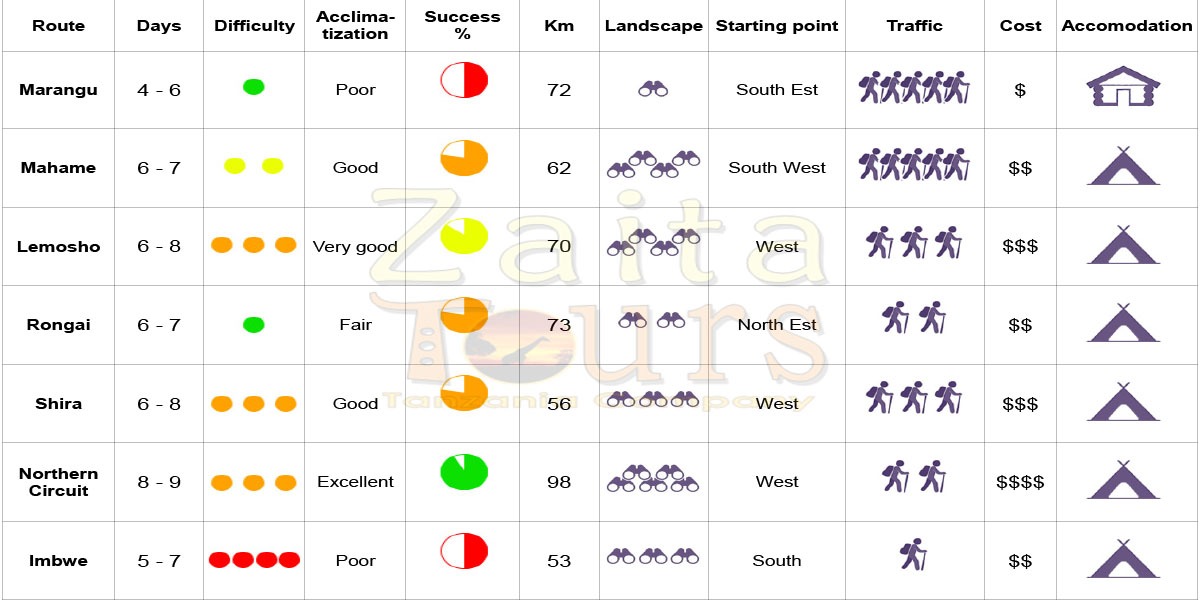 Mount Kilimanjaro is very close to the equator, this region does not experience the extremes of winter and summer weather, but rather wet and dry seasons. Therefore, the best time to climb Kilimanjaro tends to be the in driest season and warmest months.

The mountain gets more foot traffic during these periods, generally the main tourist seasons are from July to October, then from December to February. These months coincide to be dry season in Tanzania, many people visit in December.

Basically, mount Kilimanjaro can be climbed all year round. Note that the weather is unpredictable so these time periods will vary from year to year sometimes the rains come early, or late.

You may also like to know the Kilimanjaro trekking cost.

Be the first to review “Mount Kilimanjaro” Cancel reply