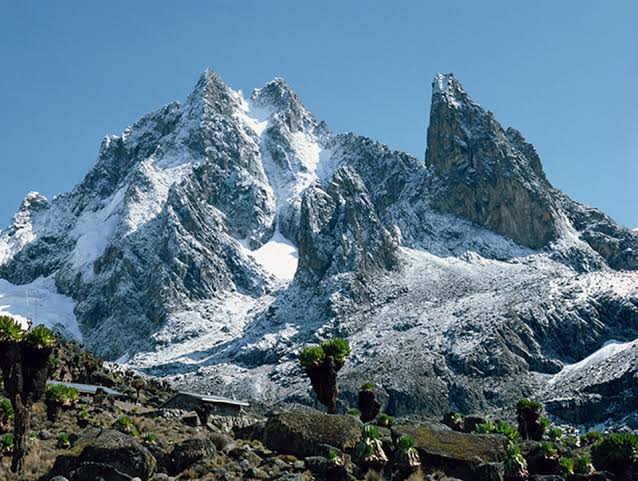 Mount Kenya, Swahili Kirinyaga, volcano, central Kenya, located directly south of the Equator. It is the second highest mountain in Africa after Kilimanjaro, which is located some 200 miles (320 km) to the south. The Mount Kenya region was added to UNESCO’s World Heritage List in 1997.

This long-extinguished volcano is heavily eroded, and the highest peaks are the crystalline nepheline syenite that blocked the former vent. There are ridges divided by seven major valleys, radiating from the central peaks. Many small, retreating glaciers, the greatest of which are Lewis and Tyndall, feed the streams and marshes on the slopes of the mountain. A distinctly radial drainage is distinctive but ultimately both streams flow into the river Tana or the river Ewaso Ng’iro.

Mount Kenya supports a series of distinctive vegetation zones, based on elevations.Grassland (with species of Acacia and Themeda) dominates the western and northern basal plateau, and grasses and low trees prevail in the south and east. Starting at about 6,000 feet (1,800 meters), the slopes are covered by a ring of dense forest up to about 10,000 feet (3,000 meters). In drier western and northern flanks cedar and yellow wood are common.

Bamboo predominates at the upper edges of the forest — i.e., from about 8,000 feet (2,400 meters), although these species decrease dramatically in height with increasing elevation and blend into the resulting field of giant heather. The so-called high moorland is above a transition zone (11,000–12,000 feet[ 3,400–3,700 meters]), an unusual area of Afro-Alpine vegetation. It gives way to lichens and mosses, growing up to around 15,000 feet (4,600 meters). Beyond that there’s only bare rock, glaciers, and other ice and snow areas.

Mount Kenya National Park (1949) occupies 277 square miles (718 square kilometers), including much of the mountain’s lower skirts. The park and its habitats are home to a number of large animals including lions, buffalos, black rhinoceros, and leopards. Many endangered and uncommon species also live there, such as sunni buck and albino zebra. The Kikuyu and allied Embu and Meru populations cultivate the fertile lower slopes.

This particular trek ascends from the west along the Naro Moru Road, and is our most common ascent choice. This involves the legendary ‘ Vertical Bog ‘ climbing above the Met Camp for an hour or so and taking the hiker into the Teleki Valley and up to the Mackinders Camp. From here, an acclimatization day follows and then an early start to the top, initially over simple paths to the valley head and then up a steep zigzag route on loose ground to meet the Austrian Hut at the base of the Lewis Glacier which has now greatly receded over the past twenty years.

This path has the added challenge of a Via Ferrata, besides the stunning beauty. Feel the airy exposure of scrambling the side of the Austrian Hut summit range, the fixed lines help to provide some extra confidence, but the approach to the summit by Naro Moru is certainly an adrenaline rush for those looking to experience the exposure of rough peaks.

Our most popular descent from the summit is the spectacular Chogoria path, but it is possible to make cheaper and faster descents down the Sirimon route or down the Naro Moru route.

As with the Naro Moru Route, Mt Kenya’s Chogoria Route does not require any technical skills in climbing. This is probably the most beautiful of the trekking routes, but it’s also the longer option and our most popular downhill path, but you can also climb the Chogoria route. This route starts and finishes at Embu and requires 4×4 transport to reach the point of departure.

It’s also a trekking path that takes you across the Gorges Valley and the Lewis Glacier to the peak of Point Lenana. There are lakes and tarns to explore along this route, though not the same facilities you get on the routes from Naro Moru and Sirimon, any climb on the side from Chogoria will be a camping trip.

Sirimon is another walking route to Point Lenana, the shortest of three trekking routes to Point Lenana. The path also starts from Naro Moru and takes five days, and the varied scenery and fun hiking make this route the perfect choice if followed by a descent along the Chogoria route down the other side.

For trekking to Point Lenana we have several different hybrid routes, allowing you to go up one path and down another. Camping routes are almost all but some have mountain huts to upgrade to. Our Mount Kenya Traverse ascends the Naro Moru and descends over 5 or 6 days via the Chogoria path, and would be our recommendation as it blends magnificent beauty with airy and difficult trekking and good acclimatization. At seven days, the Summit Circuit is a bit longer and explores the nooks and crannies of the range, circling the massif of the summit and camping high all around. This includes going on a search for a very missing elephant named “Icy Mike!!

Best times to climb Mount Kenya from any of the trekking routes are January through March and June through October but it can be climbed all year round. Usually the rainy seasons happen in April, May and November. Nonetheless, they have been difficult to predict in the last few years with the onset of climate change.

Whatever path you pick, the Alternative for Adventure encourages proper acclimatization. We’re adding extra days and hikes into our itineraries to make sure you don’t ascend too quickly and you’re properly acclimated.

Be the first to review “Mount Kenya” Cancel reply