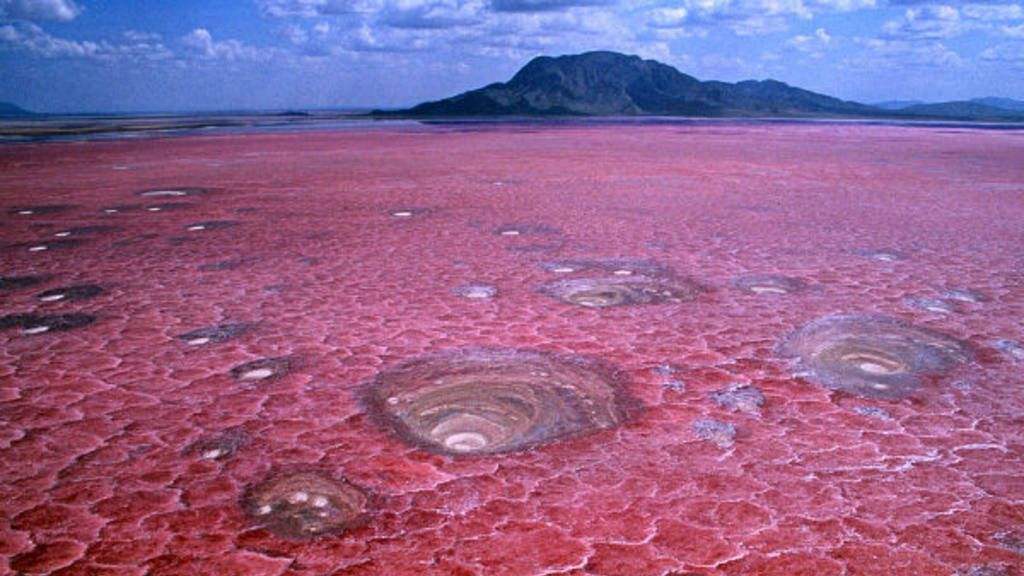 Lake Natron is located in Tanzania’s northern region. Arusha in Tanzania and Magadi in Kenya are the closest towns to Lake Natron. It is the world’s most important breeding place for Lesser Flamingos. Moreover, 2 million Lesser Flamingos live in East Africa, accounting for three-quarters of the global population, with the majority of them hatching at Lake Natron. Food is plentiful, nesting sites abound, and the lake is remote and unspoiled.

Lake Natron is regarded as Tanzania’s beautiful but deadly red lake. The lake is unlike any other you’ve ever seen or heard about. Why do you think that is? This is fantastic since it occasionally turns red in some areas! Aside from becoming red on occasion, Lake Natron is also remarkable in that water is extremely caustic (alkaline) due to the surrounding volcano. Most animals are poisoned as a result of this. In and around the lake, animal and bird corpses can be found. This is why Lake Natron is known as a dangerous red lake.

Why is Lake Natron red?

Parts of the lake are often a deep red, pink, or orange color. The colors are caused by a form of algae. A species of bacteria that thrives in soda lakes frequently produces ‘algae blooms,’ which then color the water. Lake Natron’s algal blooms wax and wane, hence the lake’s color is not consistent. The lake’s edge is also frequently orange rather than red.

Why is Lake Natron deadly?

Lake Natron’s water contains a high concentration of cyanobacteria. This is an algae that produces a chemical that affects the cells, brain system, and livers of most organisms that consume it. As a result, many of the birds and animals that drink from Lake Natron die.

The weather at Lake Natron is primarily hot and mostly dry, and the coolest months are June through October. But some guests find these temperatures tropically warm as well since Tanzania is located just south of the equator. It also does get very windy at Natron. You may choose to schedule your tour of East Africa during the rainy or dry season at Lake Natron.

Since this area is not a wildlife destination, in the dry season does not see any concentration of wildlife. Simply because the lake is highly alkaline, and terrestrial and mammalian life does not drink its waters. You only want to visit during the dry season because it is an excellent time for walking tours around the lake.

The wet spring season is from November to May with the hot humid spells in January and February. The Flamingos lay their eggs normally during the end of the dry season in September and October. But the hatching starts in the wet season, and the climaxing by December. Although the costs associated with travel and safari activities do not change.

The lesser flamingo feeds on algae found in soda lakes throughout eastern Africa, but they almost exclusively nest at Lake Natron. In fact, Lake Natron is home to about 75% of the world’s lesser flamingos. The greatest times to see these wonderful birds are at sunrise or sunset when the heat isn’t as intense. Small lakes, streams, and hills in the Lake Flats provide a range of suitable settings for birds that thrive in the alkali oasis. Lake Natron is unique in Africa, and the flamingos are especially popular with youngsters, making it an ideal complement to a Tanzania family safari.

Footprints of Hominids at Lake Natron

You can walk to the hominid footprints within the concession area, where experts have documented unusual finds of well-preserved human footprints imprinted in the mud between 5,000 and 19,000 years ago. No other African site contains as many ancient Homo sapiens footprints, making it a gold mine for scientists trying to piece together the tale of humanity’s beginnings.

We’ll organize a tour up to Ngare Sero gorge to see these stunning waterfalls, which are a firm favorite among our visitors. A unique blend of dry volcanic rocks and lush tropical palms characterizes the area. It’s a fantastic place to eat lunch, so if you like, ask your guide for a packed lunch.

The Great Rift Valley is a breathtakingly gorgeous region.
A wonderful hike through the Rift Valley may be found at Lake Natron. This is a special day with the gorgeous peak Ol’Donyo Lengai in the background. This hike begins early in the morning at the Lake Natron Camp. You may walk to the foot of the Rift Valley wall from here.

You travel down this wall to the Ngare Sero Gorge’s commencement. You climb it to see the sunrise from the top. Breakfast is served while you take in the amazing views from the gorge’s rim. After breakfast, you’ll return to Lake Natron Camp by a different path.

Climb to the peak of the “Mountain of God” overnight. Climbing the 3,000-meter volcano at night is a magical and unique experience. It is not for the faint of heart, but the spectacular morning views from the top are well worth the effort. On a clear day, the peaks of Mount Meru and Mount Kilimanjaro will burst over the horizon to the east. The extreme end of Lake Natron, where its northern coast borders Kenya, may be seen to the north. To the west, you’ll be able to see all the way over the Sale Plains to the Gol Mountains, a panorama so breathtaking you’ll believe it’s not real!

Because the weather on Lengai might change on a daily basis, it’s crucial to realize that your guide will decide whether or not it’s safe to begin your ascent. Once on the mountain, reaching the summit segment is dependent on daily conditions, and guests should be aware that there is a chance they will not reach the exact summit, but refunds will not be given. The Village Office sets the fees for Mt. Lengai, and they can vary at any time. Prior to making a reservation, please double-check the price with us.

Where To Stay In Lake Natron

There are two famous accommodations in the Lake Natron the Moivaro Lake Natron Tented Camp and  Lake Natron Camp, both are budget accommodations. Moivaro Lake Natron offers nine guest tents with simple furnishings, as well as four basic bandas with running water, a flush toilet, a shower, and electricity. Ngare Sero Lake Natron Camp offers eight Bedo-style tents that are designed with traditional methods to keep you cool during the day. Meals at these camps satisfy your appetite and dishes are prepared with local ingredients, such as meat, poultry, fish, vegetables, and more, and special dietary needs can be accommodated during your exploratory safari.

Be the first to review “Lake Natron” Cancel reply