The Serengeti ecosystem is a world-famous natural wonder. Wildebeests, zebras, and Thomson’s gazelles make up the world’s biggest ungulate migration. The Serengeti National Park is a UNESCO World Heritage Site because of its robust predator populations and iconic wildlife like elephants, giraffes, and rhinos.

Serengeti National Park is located in northwest Tanzania. Its southern region is a 5-hour drive from Arusha. The word “Serengeti” is the Masai term that means “endless plain”. 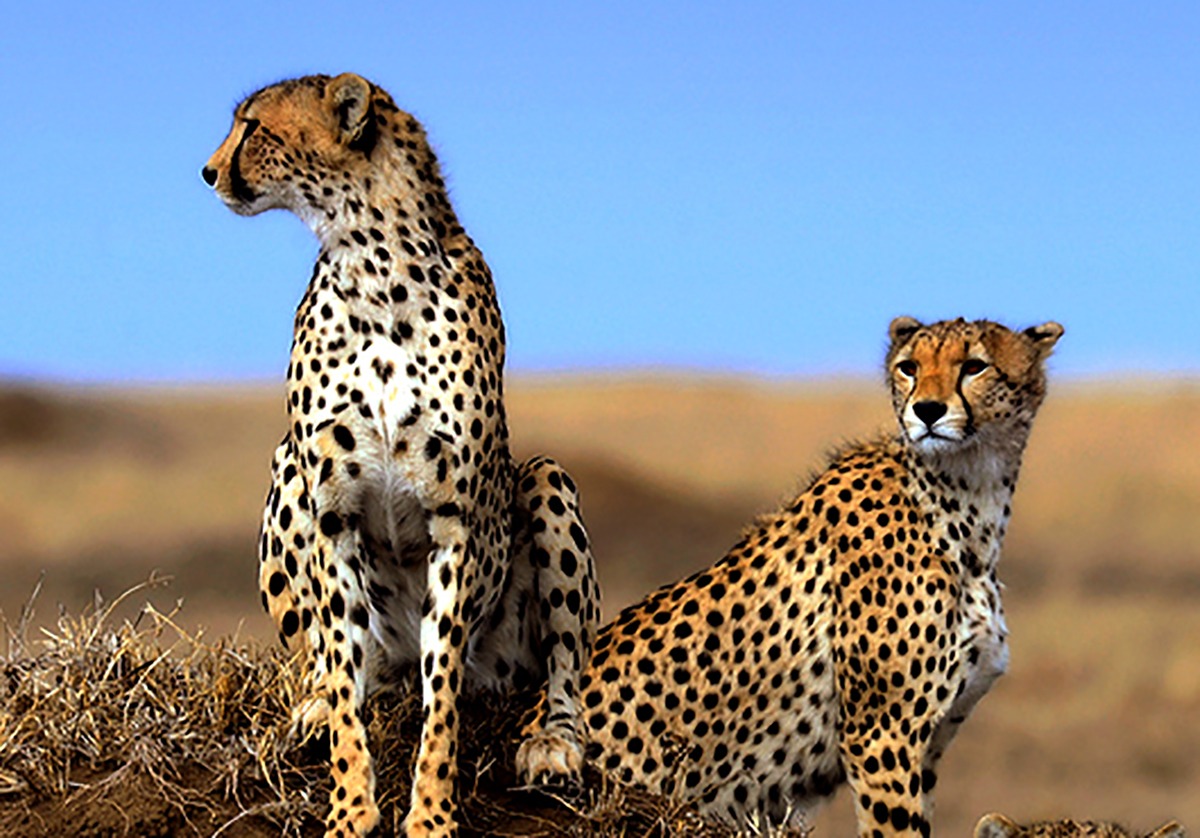 The Serengeti is home to the Big Five (rhino, elephant, buffalo, lion, leopard) plus various other species of mammals, cheetahs, and impalas. The plains and woodlands meet in the Central Serengeti region there is a diverse mixture of species and predatory animals including hyenas, hippos, and crocodiles wildebeest, zebras, and antelopes.

The Seronera River, also in the central region, is the habitat of the famous tree lion and leopards, and lion prides. There are four hundred species of birds, millions of flamingos, and primates such as baboons, vervet monkeys, and the blue and red monkeys. All of these animals have their own natural predators and prey whose natural habitat is the Serengeti.

The Serengeti is inviting visitors all year long. Even during the short rainy season (November-December) and the long rainy season (March-May), it provides the opportunity to see spectacular views of the Big Five and the annual Great Migration. Throughout the year, visitors will enjoy the vast majestic scenic landscapes and the tribal peoples who consider the Serengeti their home.

One of the greatest natural spectacles on earth occurs in the western Serengeti June-July when the Great Migration crosses the Grumeti and Kiawire Rivers that are filled with hungry crocodiles as the migration follows its northern to the northwestern course. From the northern highlands of the Serengeti, guests can see the famous Mara River and its huge crocodiles.

The migration is making its way from the Maasai Mara in the northern Serengeti region to southern Serengeti along its eastern border formed by the Great Rift Valley escarpment to begin its calving season. Once the herd arrives in southwestern Serengeti, the “calving season” begins when the wildebeest give birth to a quarter-million newborns during a three-week period. It is a great time to see the drama of the hunt, as predatory animals seek their babies. The short rains occur from November-December. Kusini Camp is on the wildebeest migration path where they congregate on Kusini’s grassy plains during calving season.

The southern Serengeti has a specific area that provides exceptional views of the Great Migration such as the Moru Kopjes where you can see the black rhino migrate this time of year and Maasai rock paintings. Also, it is an exceptional location for viewing cheetahs as is Gol Kopjes where fresh green grasses attract cheetahs. Lake Ndutu, one of the Rift Valley’s soda lakes, attracts flamingos that nest in its waters. Also, it has stunning acacia woodlands where a variety of animal species hunt within this Eco-system.

At the end of the short rainy season, the Great Migration heads to the northwest and central Serengeti as they seek new water sources. During this period, the quarter-million newborns begin the first mass migration of their lives. As the short rains have ended, they can move more easily on the dry plain.

This period includes the long heavy rainy season when many camps are closed in southwestern and central Serengeti. In the central Serengeti, the Great Migration must defend itself against the large pride of lions, leopards, and cheetahs located in this area.

The Great Migration of concerning 2 million wildebeest is joined by around 800,000 zebras along with antelopes in the western Serengeti region. This is the most effective exciting and exciting time to look at the good Migration because the huge herd of animals attempts to cross the Grumeti river that’s full of hungry crocodiles.
As the baby wildebeest and zebras are still young, they make easy prey for the huge crocodiles that waiting in the Grumeti River’s turbulent rushing waters. Many animals drown as they cross the Grumeti, getting pulled downstream by rushing currents heading westward towards Lake Victoria.

The migration throughout these months has created its way to the northwestern region of the Serengeti situated in southwestern Kenya known as the “Maasai Mara.” it’s an astonishingly stunning sight to see the migration cross the famous Mara River. 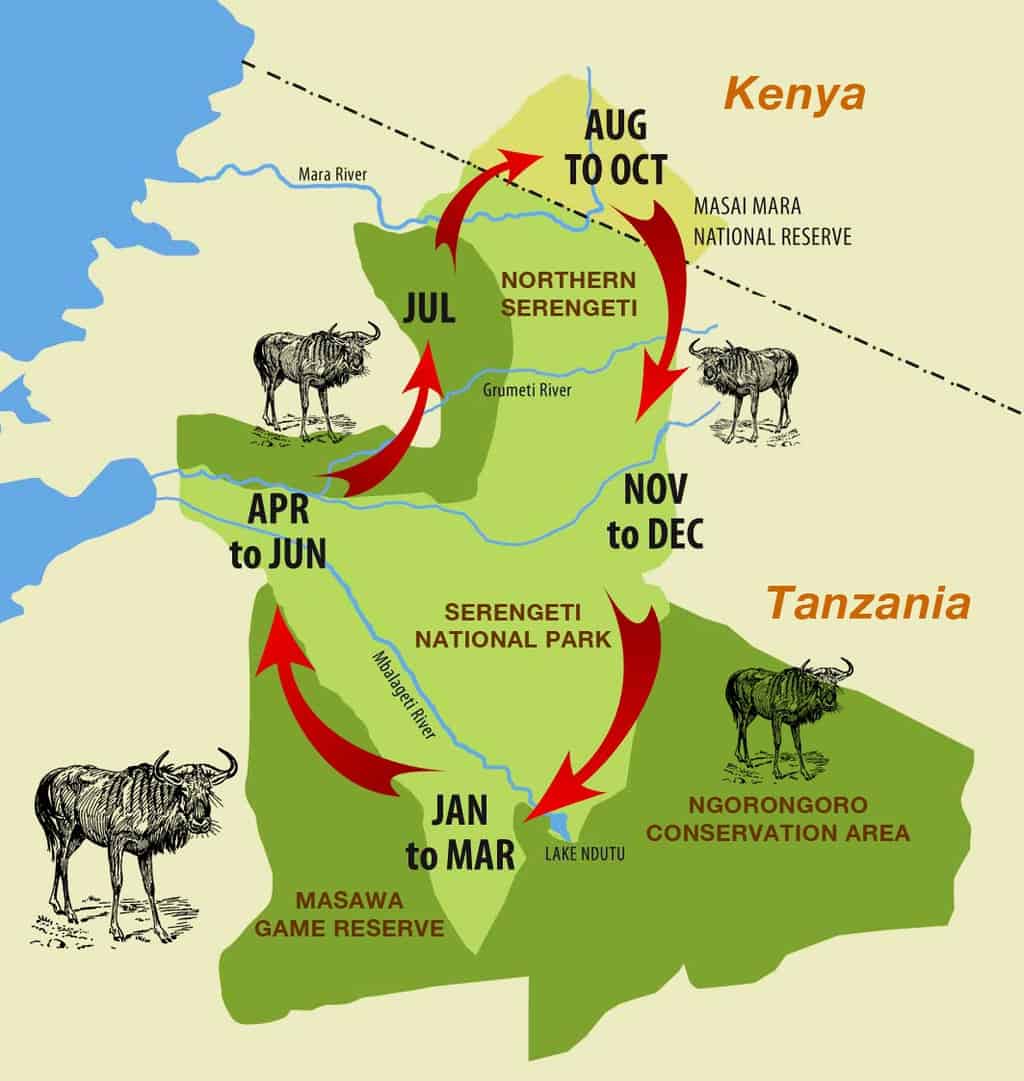 Things to Do in Serengeti National Park

The Serengeti National Park offers some activities include a hot air balloon safari over the Serengeti, game drives, and birding.

Where to stay in Serengeti National Park?

There are a variety of accommodation options to suit any budget. Our recommendations are as follows:

Due to its distance from Arusha, Serengeti is rarely visited on the first day of a safari unless flights to Serengeti are scheduled. As a result, you should talk with our safari expert to arrange the best program for you. We propose a minimum of two or more nights, depending on the time of your visit. Please contact us for more information and suggestions.